You can find this same post on Scoundrel Art if you have an account there as a collector.

I have lots of returns for sale from various Star Wars sets I did sketch cards for! Leave a comment, reply to me on Scoundrel, or tweet at me if you're interested in a purchase!

First, the big deal is TOPPS lost all of my returns for Galaxy Six. They are GONE! (Unless they accidentally were placed into sets and you're lucky.) So they sent me 10 NEW BLANKS TO DO WITH AS I PLEASE! If you missed out on getting a return from G6 this is your chance at $50/card OBO! 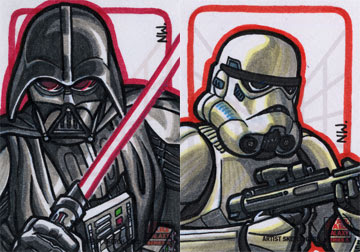 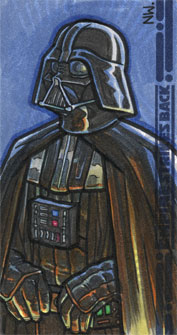 And TOPPS sent me my blanks for Galactic Files over a month late so I've got a little extra time. I'll have 6 returns for commission on GF also at $50/card OBO!

Posted by NolanWoodard at 9:47 AM No comments:

I got asked to color half of Paul Pope's short story (and Moebius tribute) for "Adventure Time" #4 at BOOM! Studios a couple months ago. I colored the 'other world' panels and then composited the other colors with mine for final. It was a fast but super fun project! This page called for my color to look like an oil painting so I came up with a new technique that I could action in Photoshop to get the effect. Thought it looked pretty good. It's only one of the two pages I colored and the white area is by the other colorist so I don't take credit for his work. I don't want to post up the entire short, it's only four pages, so you'll have to pick up the issue to read it!

Roll over for the original line art by Paul Pope! 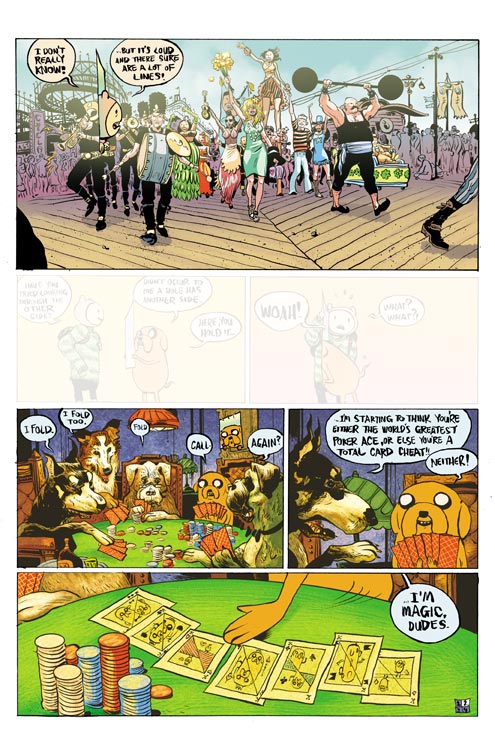 Posted by NolanWoodard at 8:37 AM No comments:

After finding out there's another batch of Marvel test pages out there I wanted to color them to further update my portfolio with them. The amazing Falynn Koch had them and graciously passed them my way. Written by Jeph Loeb and line art by Ed McGuinness, these pages are from Hulk #20 and were a ton of fun to color. The original color was done by Dave Stewart, which can be viewed here, but I'd like to think I did pretty well in comparison.

Roll over for original line art by Ed McGuinness! 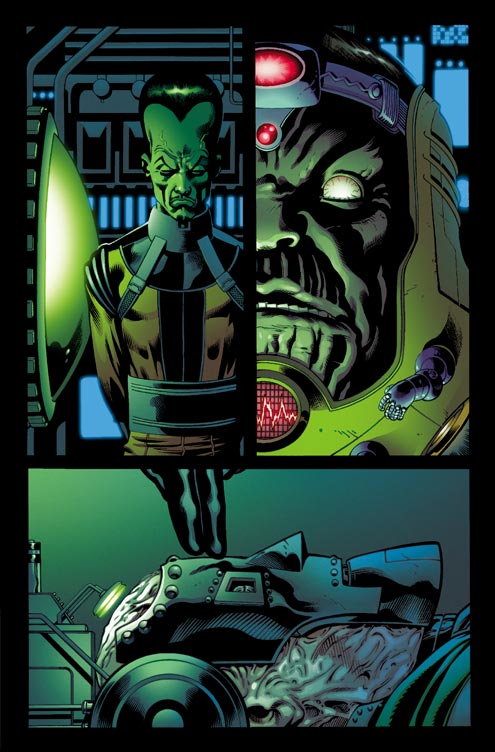 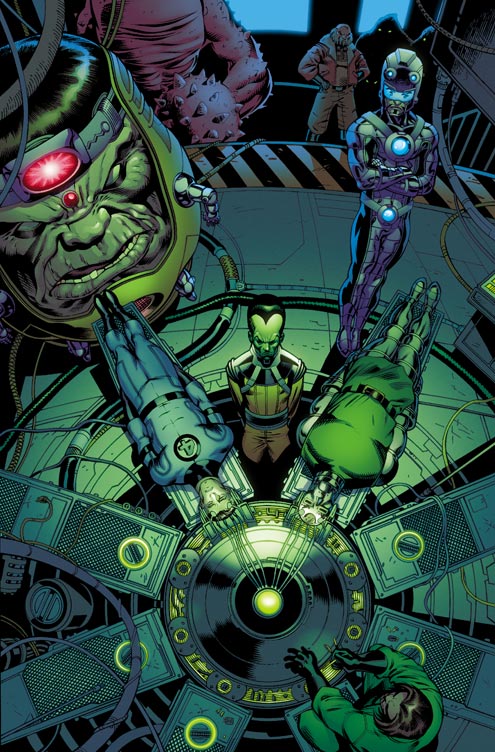 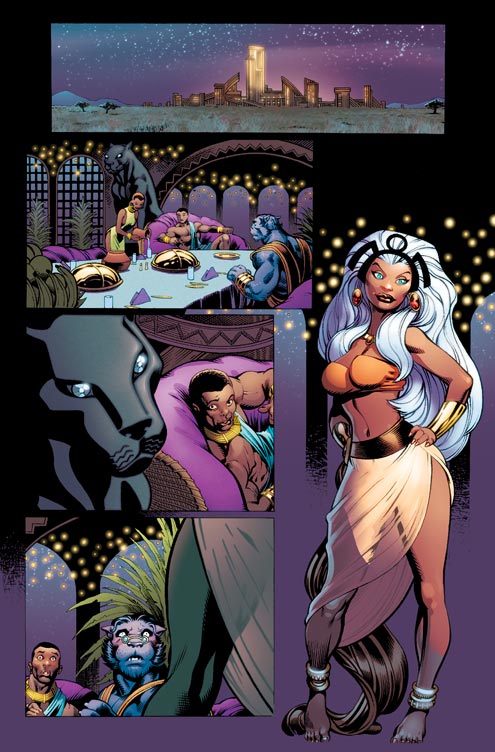 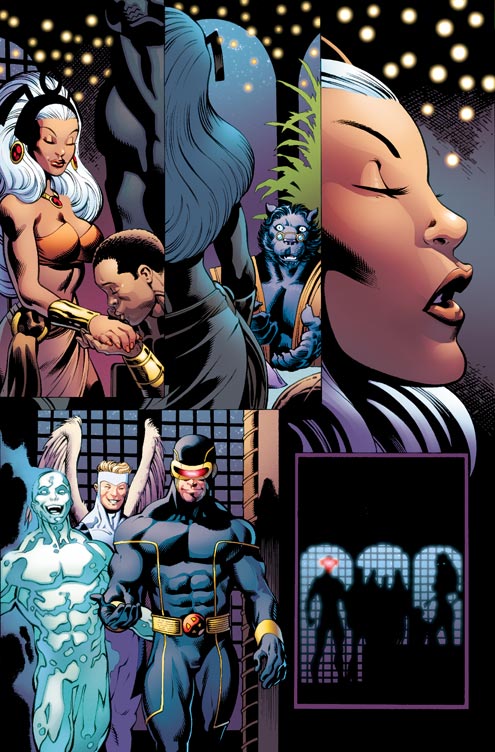 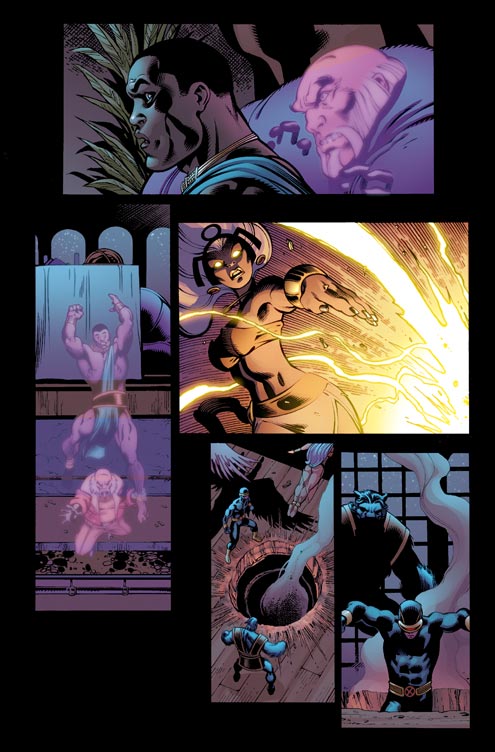 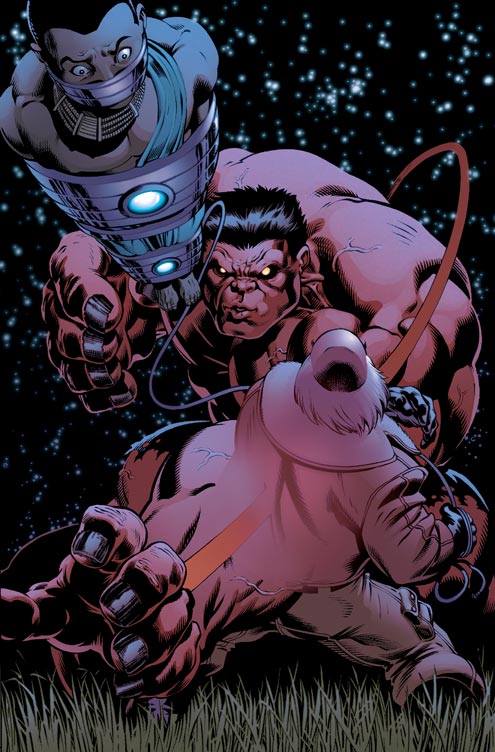 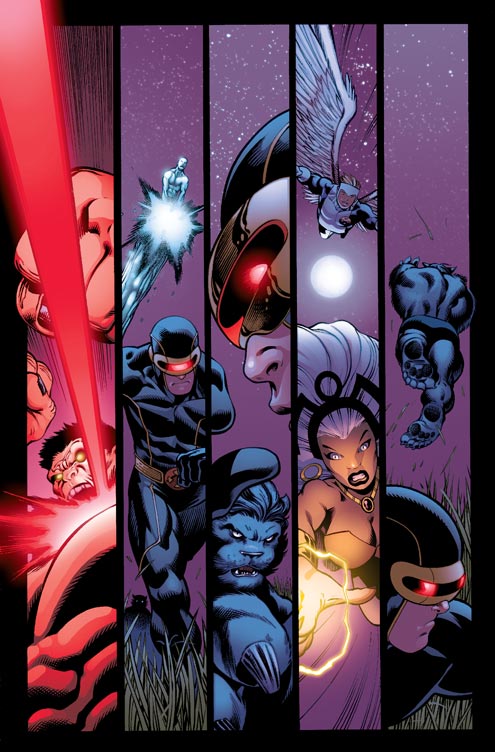 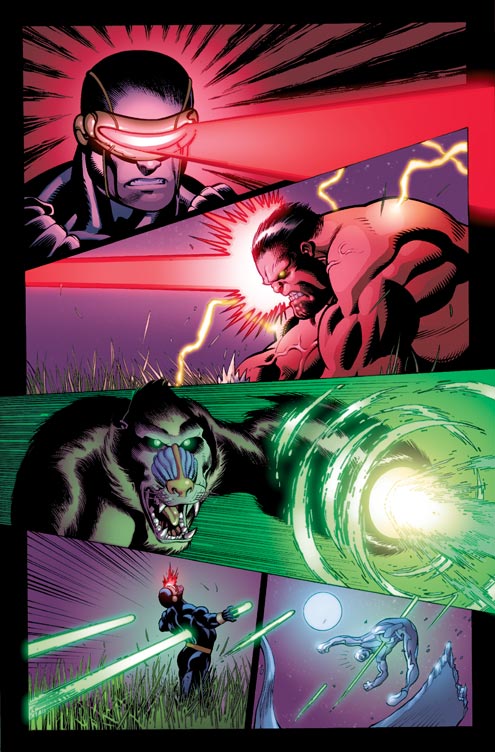 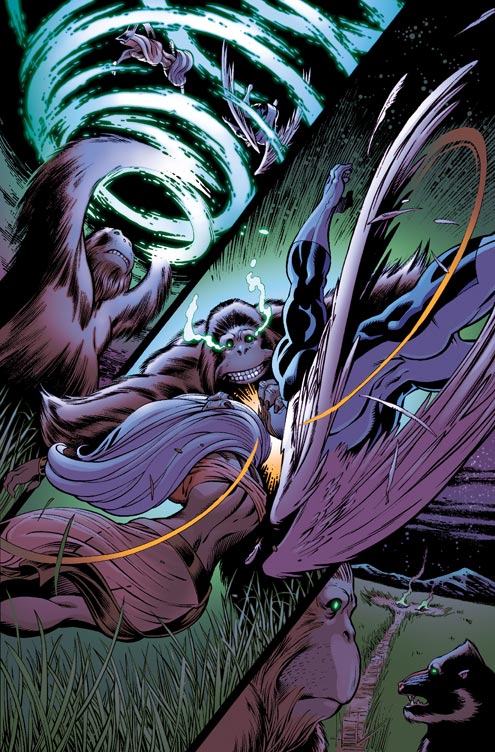 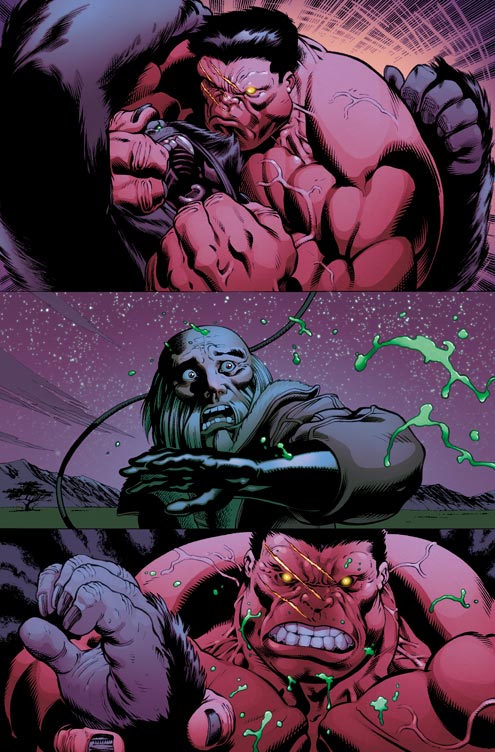 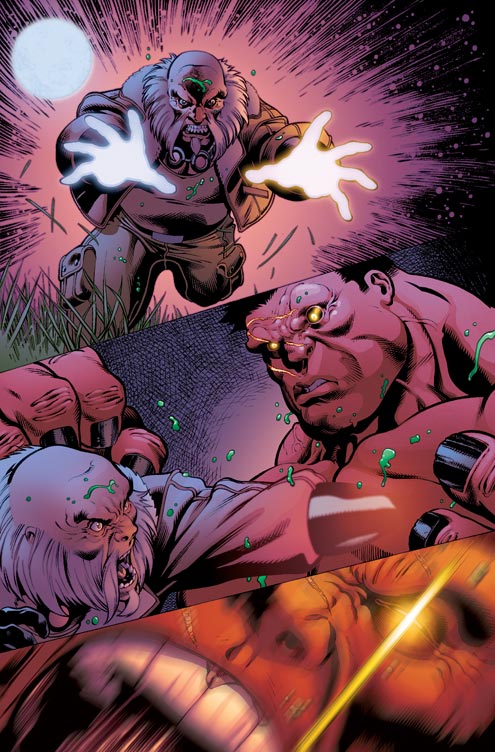 Galahad walks into a trap. Does Nocturnus help his son escape? And what is his reply when confronted with the evidence Galahad has uncovered?

Written by Mark Waid, line art by Peter Krause, lettering by Troy Peteri, and color by me. Which one is truly the insufferable one? 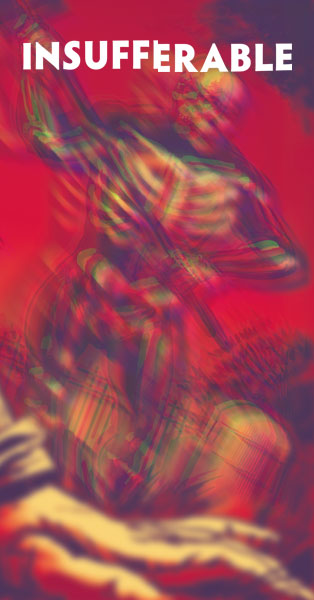 Posted by NolanWoodard at 12:43 PM No comments:

We get our first real glimpse at the company Galahad has built up around himself and those who work there. It's a great example of how a working environment's atmosphere is dictated from the top down and isn't always pretty. And the trust, or lack thereof, between father and son leads them to the only tie the two still share.

Written by Mark Waid, line art by Peter Krause, lettering by Troy Peteri, and color by me. Which one is truly the insufferable one? 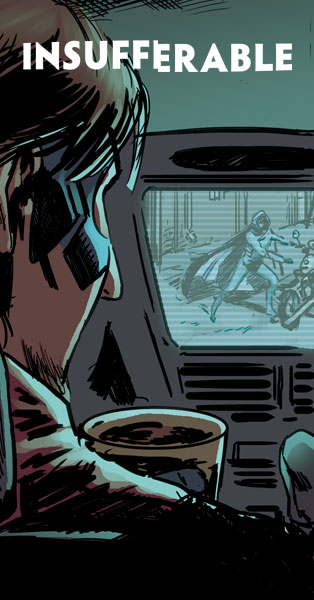 Posted by NolanWoodard at 10:30 AM No comments:

I received these pages from Bon Alimagno, back when he was still at Marvel, shortly after my son was born. Suffice it to say, I was waaay too busy to color them at the time. Now that parenthood has settled and a bunch of the titles I was coloring have been concluded, that time was much easier to find. These are from Uncanny X-men #525 and I didn't have the script when coloring these so I had to guess a few things. While I can't be for certain, I decided to treat the fourth, fifth, and sixth pages below as if they took place inside the dome seen in the first page. I wanted that shield to act as a filter and bathe everything in a pinkish light to contrast with the cool blues outside. If that's not accurate, please forgive me but I really didn't want to look at the issue and be influenced by what was previously done. Overall, I'm pretty happy with it!

UPDATE: Finally saw the actual comic. I didn't have the script when I colored this and avoided what the colorist had done. So forgive not knowing that's the X-Club members talking to the Avengers! May go back and fix that if I have time.

Roll over for original line art by Terry Dodson! 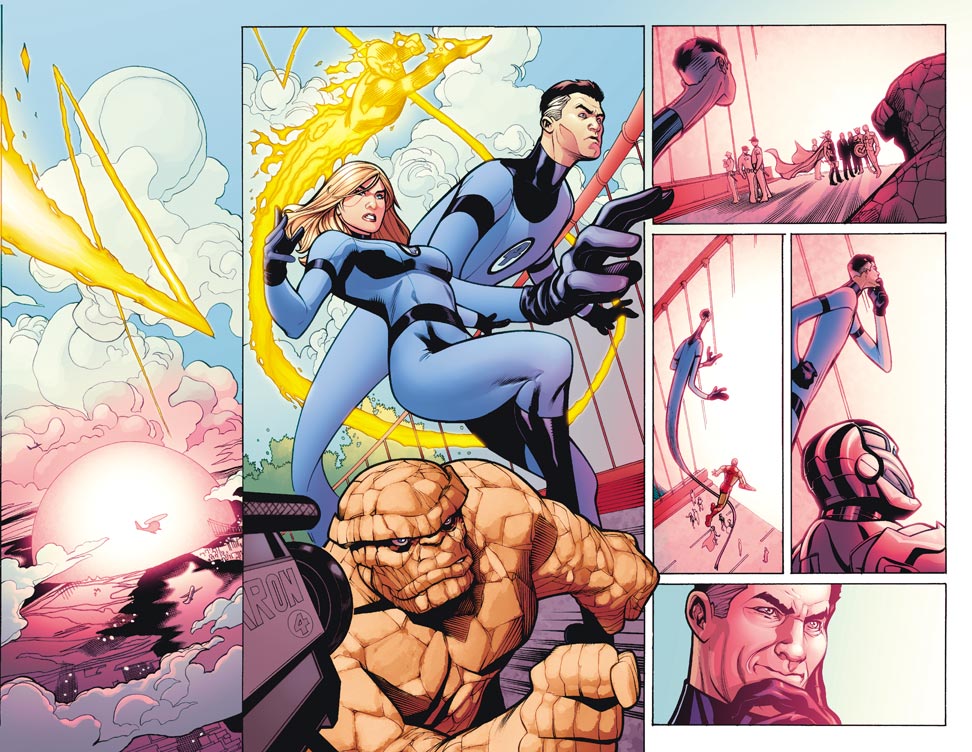 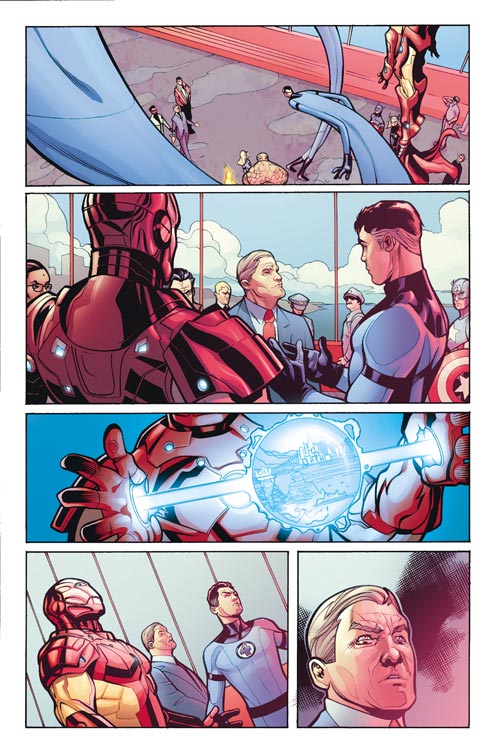 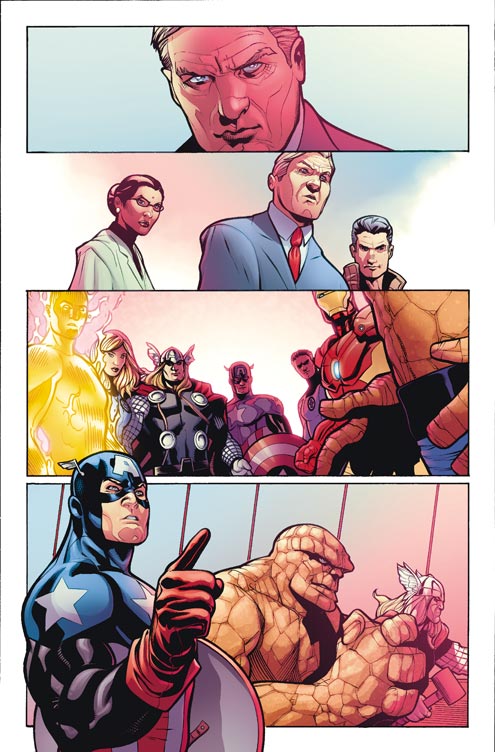 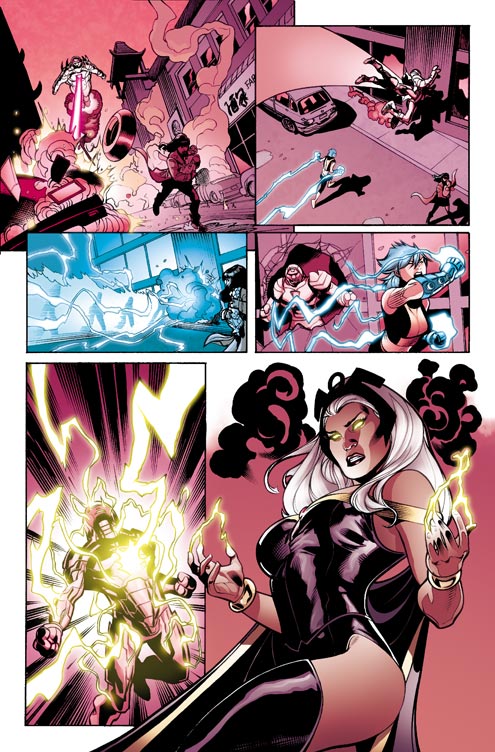 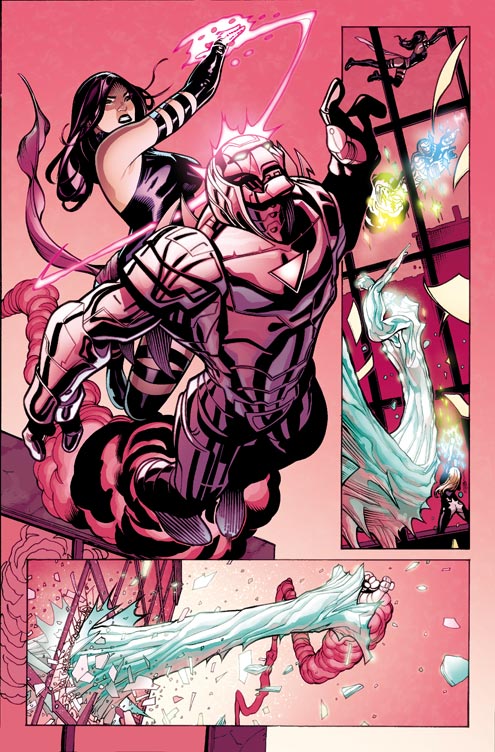 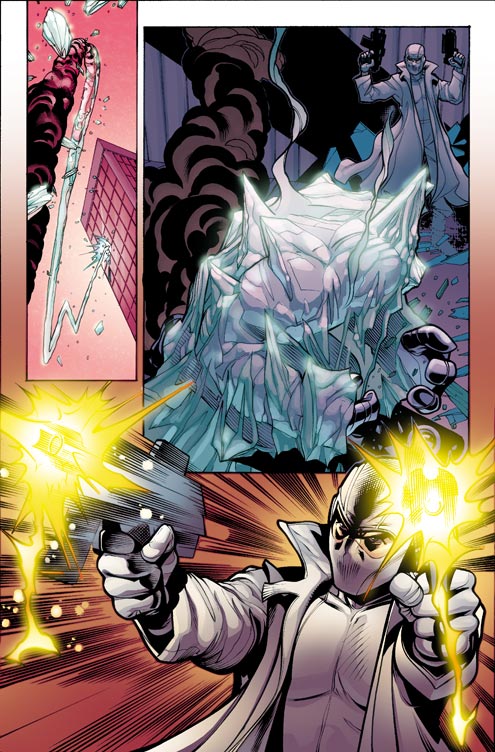 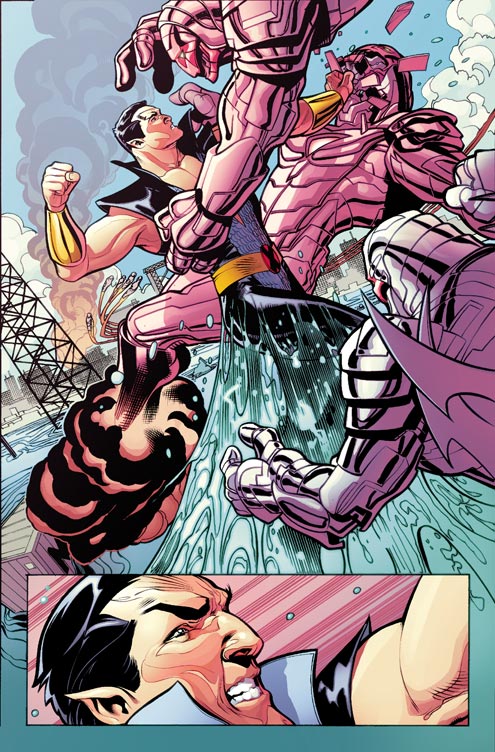 Posted by NolanWoodard at 3:39 PM No comments:

Hard to believe we're already at week ten. That's almost three issues worth of comic online for free! This week Galahad makes a horrific discovery that will have severe consequences down the road. Written by Mark Waid, line art by Peter Krause, lettering by Troy Peteri, and color by me. Get your father vs. son rivalry on!

Also make sure to take part in the Thrillbent/Insufferable Fan Art Contest! Check out this link for more information. Winners will be announced July 10th, the day before SDCC. 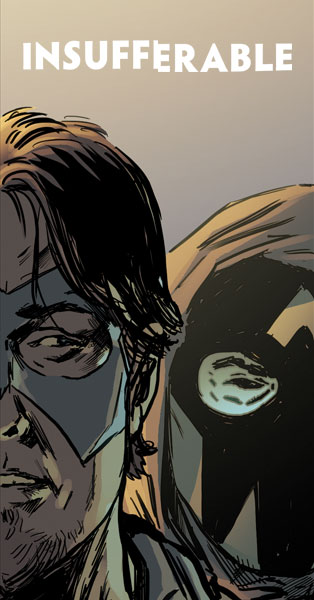 Posted by NolanWoodard at 1:01 PM No comments: