Can't believe it's been two years since I drew this but I'm still pretty happy with it. Considering the hours I've been putting in since January I needed just one to do something for myself so I finally colored it. It's what I envisioned Dick Grayson would look like as Batman back when he was taking over the cowl. Superficially he's still scary but the details really contrast the darkness Bruce Wayne embodied. Also tried some different methods of making selections for soft cuts without using the lasso to speed things up. Thought it turned out pretty well. 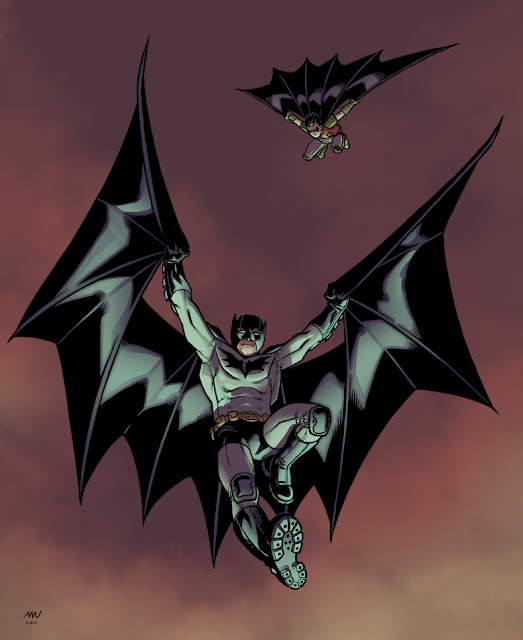 Posted by NolanWoodard at 9:32 PM No comments:

When I colored this I was still blissfully unaware 'Irredeemable' was coming to an end. Now that I know, the context of the image made much more sense. This is the penultimate issue. Only one left! It's been a great ride! 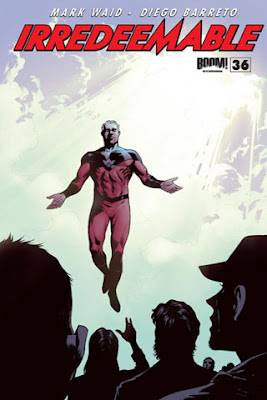 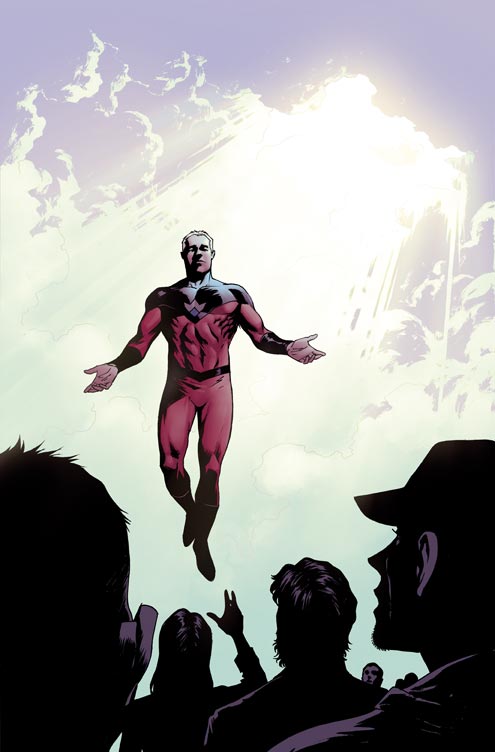 Posted by NolanWoodard at 9:27 PM No comments:

Colored a couple more covers for BOOM! Studios on "Planet of the Apes" #13. Check them out! 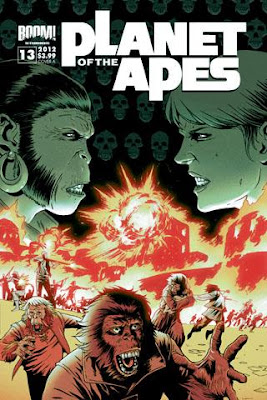 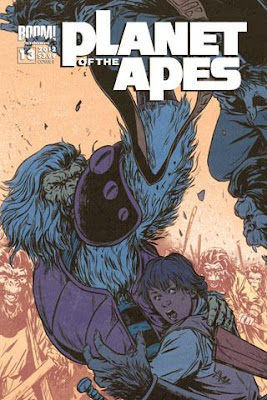 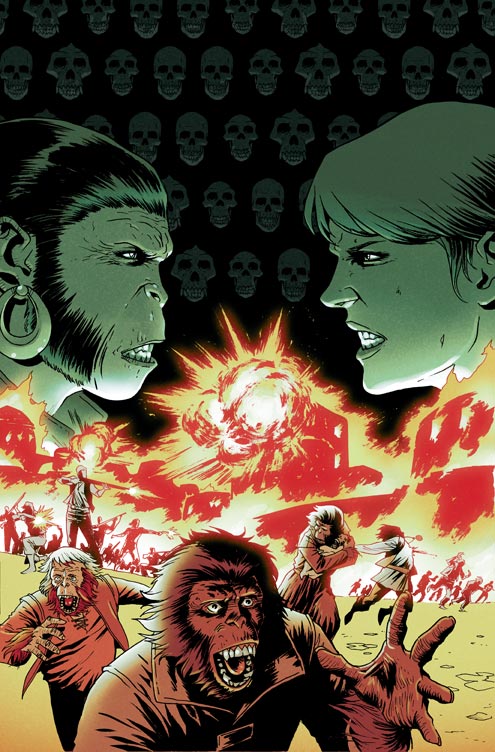 Roll over for original line art by Marc Laming! 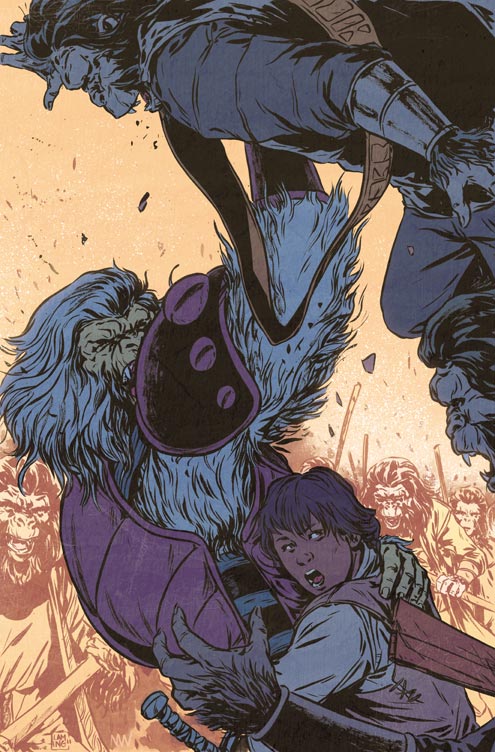 Posted by NolanWoodard at 9:19 PM No comments:

Only one more issue left of Mark Waid's masterpiece of psychology applied to the superhero genre. I'm currently coloring #37 and it's a little bittersweet.

For this issue I was actually mentioned by CBR with a glowing review! "The coloring from Nolan Woodard continues to astound as he switches between pages of character to pages of brilliant science and dastardly deeds." said reviewer Ryan Lindsay of CBR here. Talk about humbling. I've got to make sure #37 at the very least reaches this level. No pressure. No. None. Oh boy.

Anyway, here's a preview (which is late since I've been so incredibly busy) for 'Irredeemable' #36. Roll over for original line art by Diego Barreto! 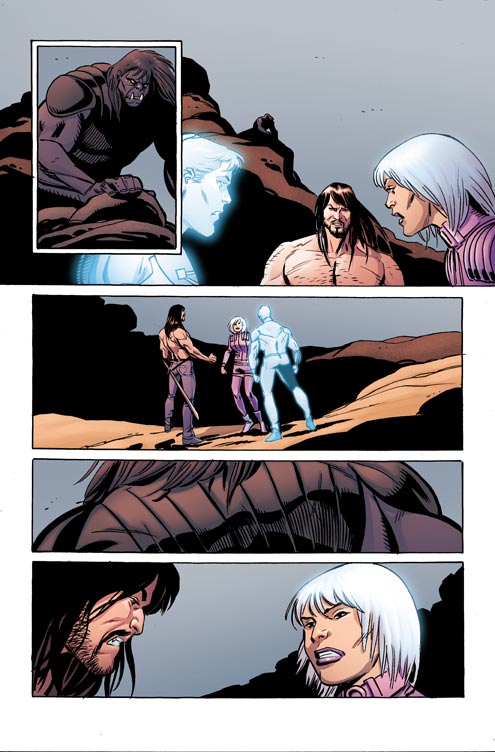 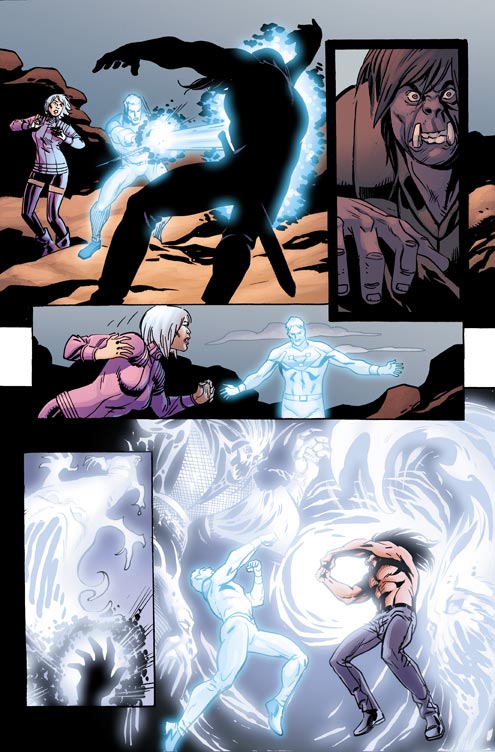 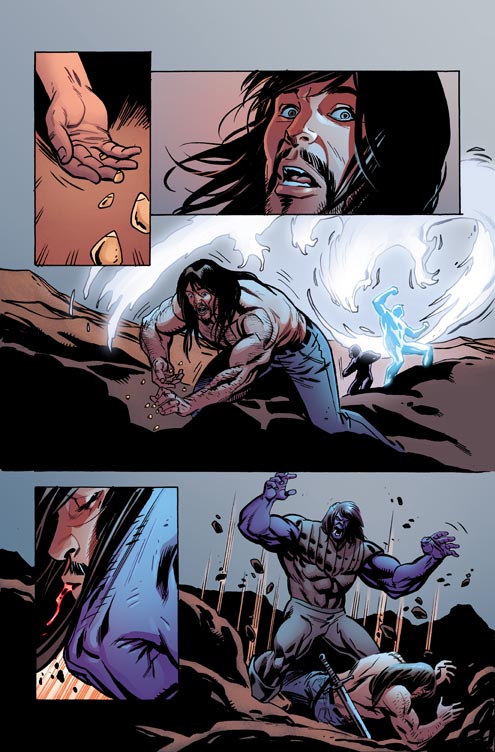 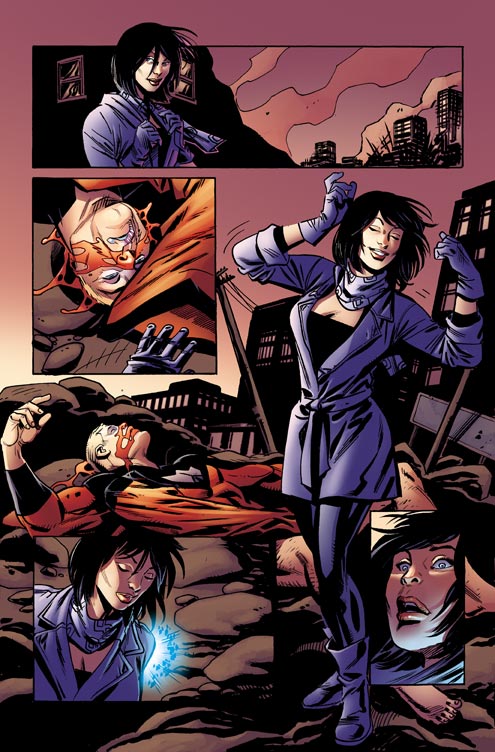 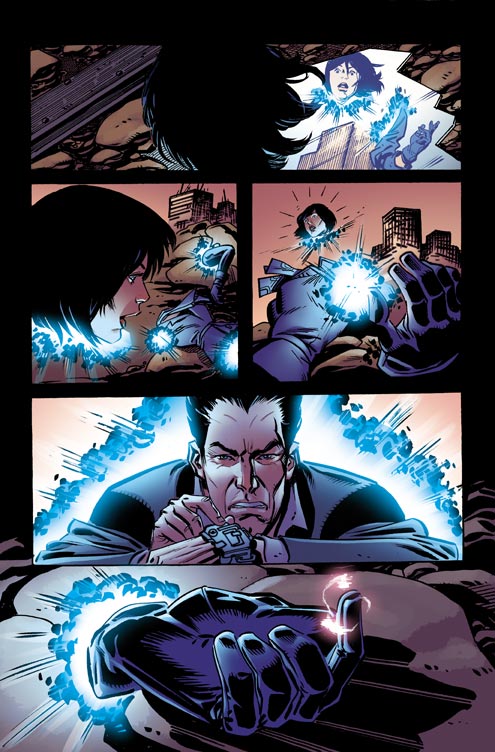 Let me put this out there. I'm the luckiest SOB you've ever met, heard of, read about, or even thought could exist.

For the past two years I've been coloring 'Incorruptible', and then later 'Irredeemable', for BOOM! Studios. It has been an honor to be chosen by the editors, Shannon Watters and Matt Gagnon, to work on both of these landmark titles by Mark Waid. My hope was the draw of the titles and Waid's name would get my work noticed (coattails are viable tools) because I want a career as a colorist, not just a part-time gig here and there. I wanted to sound out that I'm here to stay, evolve, and enhance each page I get to color. It worked. I got noticed. But what I didn't expect was it coming directly from Waid. He wanted me to work on a secret project with him.

Have I mentioned I'm lucky?

Obviously, it would have been foolish not to accept. It's also allowing me to work with Peter Krause who I just barely missed out coloring on 'Irredeemable'. I'll be honest and at first wasn't sure what Waid's project would change about digital comics until I read he was also spearheading Marvel's all-digital INFINITE line with 'Avengers vs. X-MEN' #1 Infinite. Reading up on what Waid and Quesada were saying about the medium I came across Balak's take on digital comics. That was a game changer for me. New potential, compositions become flexible, fertile ground for new storytelling possibilities, and Krause and Waid were exploring it all and wanted me to help.

The project itself is going to be amazing but this entire endeavor goes beyond just the entertainment value. Mark and his fellow trailblazers are sharing everything we learn from successes to mistakes online. He's re-purposed his website MarkWaid.com as an educational tool for the world to learn right alongside us. That is what I call giving back and then some!

Since the beginning I've been excited to make this announcement to the world. Waid and Krause are wonderful collaborators and make me, a colorist, feel like I matter, really matter, in a world where colorists often don't even get credit let alone recognition. Considering I wasn't able to go to C2E2 to sit on the panel with them (literally writing this as they make the announcement) I won't say much here except come May we're shaking things up at the new digital comic website THRILLBENT and you're invited for free! 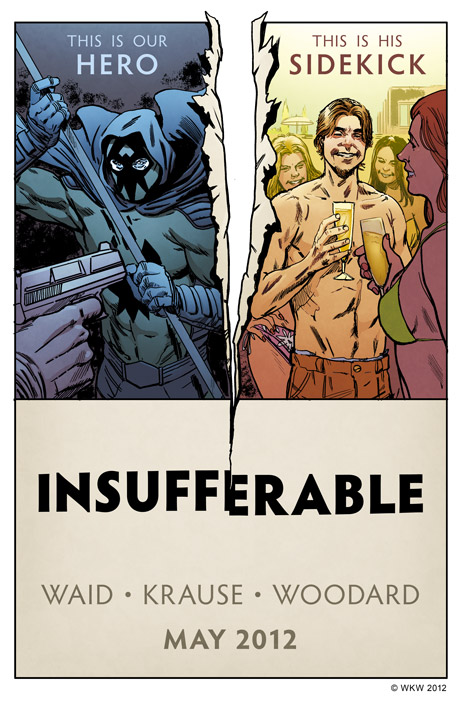 With the death of Armadale we continue counting down to the end as the radiation cloud from 'Irredeemable' comes to America and someone from Max's past returns in this issue in a big, big way. Damian Couceiro comes aboard as the line artist and really shines in the dirt and grit that is Coalville's story of a bad man gone good. This series continues to prove why MTV rated it one of the best ongoing series of 2011. Get your copy this week! 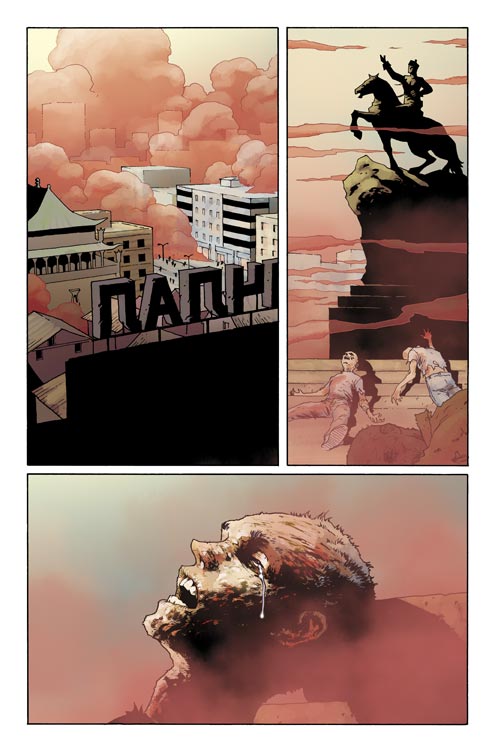 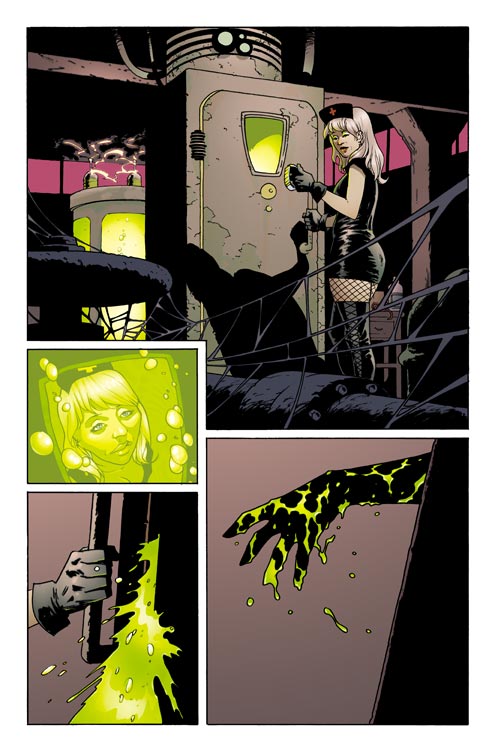 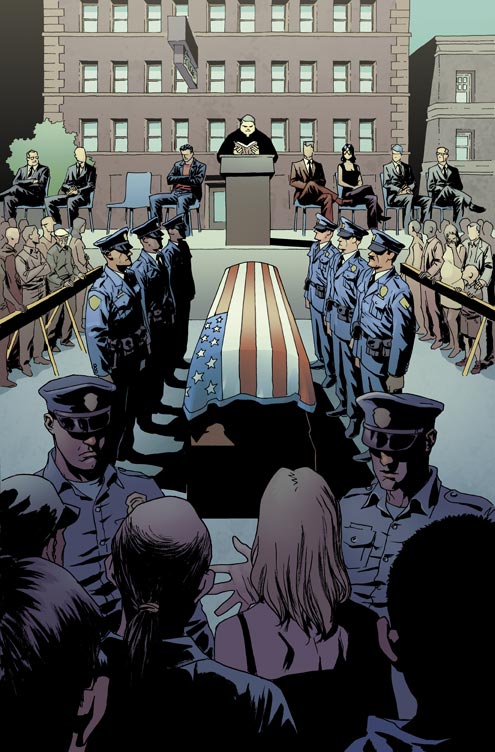 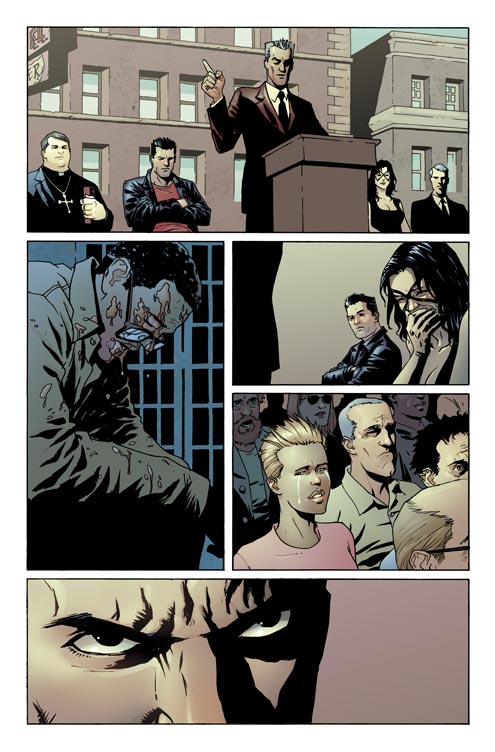 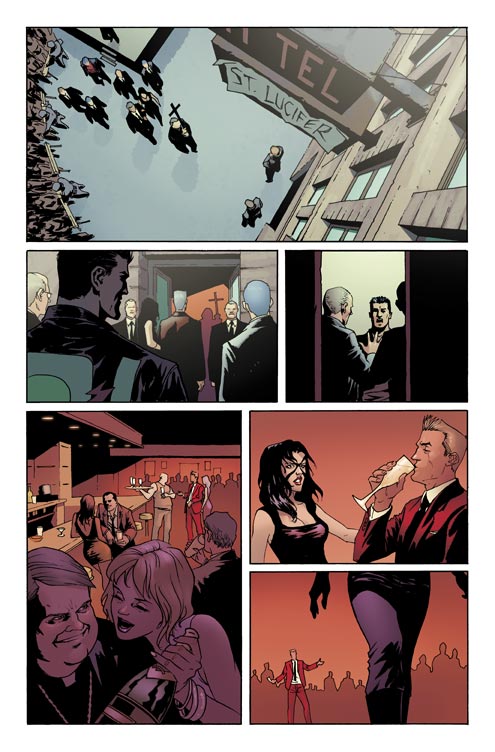 Posted by NolanWoodard at 9:58 PM 2 comments: