All in all it took me about 26 hours to make this guy. It's the first time I ever created a maquette so while I am not happy with the results I do understand it's pretty good for a novice. The character is from a personal concept I continue to develop on and off. He lives on the frozen tundra so I wanted him to look worn, rusted, and freakin' cold. 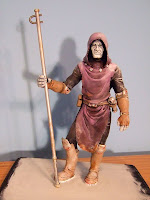 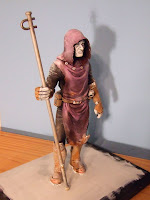 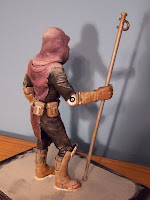 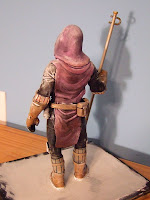 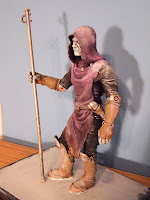 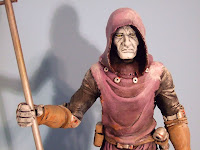 Posted by NolanWoodard at 7:51 PM No comments:

Time for a personal note on astrophysics and astronomy cuz I'm a geek like that.

Found a science thread worth reading called Space: Final Frontier! I actually like it more than io9.com because it's current news but, sadly, it doesn't update as often. I've added RSS feeds in the right sidebar to both.

"Sunshine" was never released domestically (in the US) but I'm hoping it's because American audiences are too pop-culture driven and not that the movie sucks as bad as I fear. I added it to my Netflix so we'll see. (UPDATE - Wow. That movie was horrible. Scientifically inaccurate, characters and personalities are consistent for a dysfunctional family not a team of elite scientists and astronauts, and somehow it turns into a horror slaughter-fest. Lame. Avoid this movie. It's crap. The type of crap that makes me hate Hollywood.)

Peter F. Hamilton's "The Dreaming Void" comes out March 25th! If you've not read "The Night's Dawn" trilogy you're missing out on over 5,000 pages of pure brilliance.

Alastair Reynold's "The Prefect" comes out April 10th in paperback and "Galactic North" is out now! His "Revelation Space" novels are mind blowing.

And if you've never been to the Hubble Site Gallery you are missing out. I want to cover my arms to look like the cosmos with the Drake Equation on my left but couldn't quite figure out what I wanted on my right. Then I found this animated GIF below. I think a scale chart would be ideal. It shows perspective on how small we really are. Nothing man ever does will change, alter, effect, or even temporarily dimple the universe. God, I love this stuff.

Finally, check out this awesome shot my little brother took while driving through central Florida. Lucky bastard got to see it live! 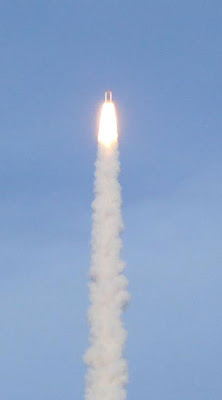 I've been inspired to do a comic short on gravity. Sounds dry, right? Then you aren't thinking hard enough. Stay posted.
Posted by NolanWoodard at 8:40 PM 3 comments:

If I've ever drawn Iron-Man before I don't remember doing it. He's grown on me a little here and there (strangely, I liked him in "Civil War") so when I decided to make him the weekly sketch challenge for The Temple of Cartoon Mojo I figured what the hell, I'd do a sketch with the students and post it along with their's sometime this weekend to show support. 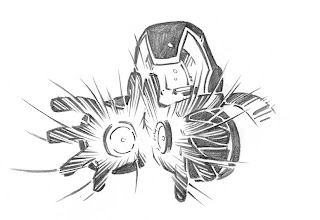 It was also a really great way to test out my new mechanical pencil! For some reason I've always gripped my utensils like I'm trying to throttle the life out of them. Well, in order to prevent my fingers from cramping I put padded grips on everything I draw with. This pencil comes with one built-in and it's soooo comfortable for me to hold and use! And what's especially nice about it? Shawn bought it for me from JetPens.com! You can't beat a good friend. He's got a free lunch coming his way.

And now time to get back to work. No one can't tell me I dunno how to have fun on Friday nights.
Posted by NolanWoodard at 8:59 PM 1 comment:

Another round of Russians for Riswold. Sounds like a kids' charity... but it's sooo not.

Posted by NolanWoodard at 3:45 PM No comments:

Here's my final submission for the 2008 SCAD Sequential Art Anthology. More than likely it's too "space" to be selected as the official cover but I loved working on it! If they do select it there's lots of room for copy on the back cover though I would hope they'd ask me to add it myself since I'd need to create an FPO so the stars don't interfere with legibility. 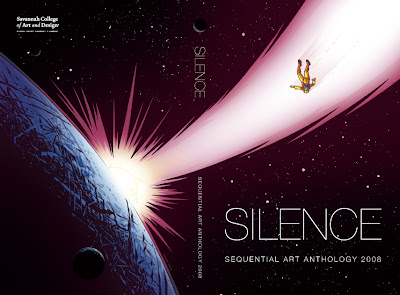 Posted by NolanWoodard at 7:11 PM 2 comments: