I don't like shows about people doing stupid things and knowing they are stupid but do them anyway. This removes a LARGE portion of television from my interest. Mad Men was one of them. Plus, it's all about advertising which I worked in for ten years. To quote the show, "Been there. Done that."

However, my wife was watching it so I gave it a chance. It sure has lots of stupid shit but much of it is due to the rules of society in the '60s. She tells me that the amount of smoking and drinking on the show is very accurate to the time period and I can tell you the amount of drinking and adultery in advertising is just as accurate. Yuck. I've become fascinated with how the hell could people live/act like that and think it's okay?

But this fascination isn't enough to keep me watching. Joan Holloway is. My God. This is what women should look like. (My wife being one! RAWR!) Move over twigs! Go eat a small truckload of ice cream! Now I just hope the character doesn't turn into the back stabbing bitch I think she is. At that point, no amount of curve will make me want to watch. For now though, if I can ignore the smoking, happily. *cough* 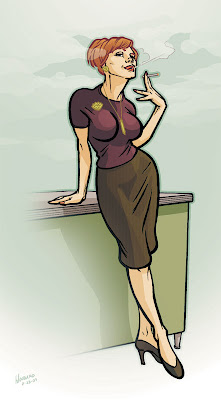 UPDATE: Just found out she went to the high school I was supposed to go to if we hadn't moved away from Fairfax, VA, and was a goth girl. Be still my... heart!
Posted by NolanWoodard at 3:01 PM No comments:

I've got thumbnails coming out of mah brains! I'm officially 1/3rd of the way through the screenplay. I was hoping to be more like 2/3rds at this point but breaking up a screenplay is a ton more work than thumbnailing a script that gives you page breaks, panels, etc. Still, it'll all be worth it in the end!

Posted by NolanWoodard at 4:44 PM 3 comments:

My To-Do List has been put on the back burner for the foreseeable future so I can focus on "Lion of Rora". I'm working from a screenplay so there's no telling how many pages the comic will be in the end. That's both good and bad. Good: pacing and storytelling are mine to control since there's no script. Bad: no concrete deadline can be made since the page count is undefined and I'm estimating it to be much larger than planned. That means I'm focusing on a balance between keeping the page count down and doing what the story needs to make it successful. That's not easy but, to use a marksman metaphor (bows and arrows on the brain), I feel like I'm clustering nicely around the bullseye with few stray shots.

Here's a couple of thumbs. So far, this is the only scene with royalty in the book. Lotsa dialog. Say hello to the Dick... errrr, Duke of Savoy.