I've been extremely busy lately between family, commercial contracts, and teaching. This weekend has been the first I've had free in two months. It's been a wonderful weekend spent in the company of my lovely girlfriend. I indoctrinated her to comic book conventions and went to the Atlanta Comic Expo. Thankfully, it was a small event and it didn't completely scare her off going to other conventions in the future. heh

Though I do not have any recent comic work, I do have some commercial work to post. These were made for Target's latest catalog but are not the final versions being used. The final versions are completely flat to allow the product photos (not seen) to "pop" off the page more. What you see below is a previous version using cuts and gradients to express volume and depth. The volume competed with the product photos but as stand-alone pieces without products I believe the versions below are more interesting.

In the final she has pigtails with cellphones flying around her. 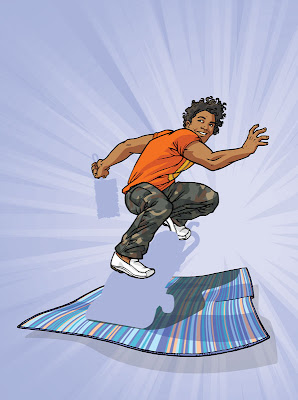 In the final there is simply a star burst, almost exactly like the one below, and a ton of household cleaning supplies floating around him.

This actually is the final minus the Target credit card composed into the blank field. It's the only one with cuts that made it to the finals.

I am hoping in the coming weeks as spring quarter in my teaching career levels off, which has turned out rather well, I'll find time to work on my personal comic projects. Look for posts of that in the coming month!
Posted by NolanWoodard at 7:32 PM No comments: