I'm lucky enough to work with some amazing artists. June Brigman is a fellow professor at SCAD-Atlanta in the SEQA department. When she posted this sketch I knew I wanted to color it. She was kind enough to send me a high res scan of it so I could do just that.

Pencils by June Brigman. Color by me. 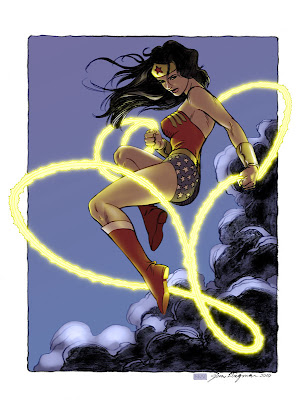 Posted by NolanWoodard at 12:35 PM No comments:

Been sitting on this one for awhile. I designed this Captain America uniform almost a year ago basing it off of Marine Corp BDUs they currently employ. I figured if it was good enough for our boys Cap would figure it good enough for him! He is after all a symbol and morale booster, not just a super-soldier. Anyway, coincidentally the scale mail signature armor of Cap's is actually almost exactly like the real-life armor called Dragon Skin so I happily kept it. Then I pulled other design elements: modular straps and belt, (modified) Enhanced Combat Helmet, and desert color the US military has become known for. It still feels very "superhero" but more updated and practical. I had hoped they'd think in the same direction for the movie design (if for nothing else but to respectfully nod to our hard working troops) but sadly they went the clichéd, cheap, made-in-China plastic look you see in every superhero movie now (including Thor). Anyway, finally colored it and played around with some other techniques. Pretty happy. 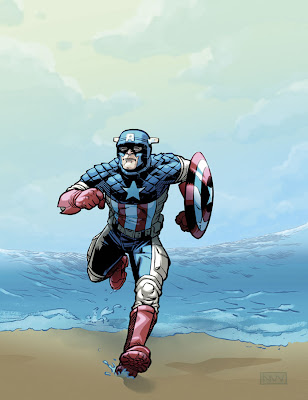 And here's Gunnery Sergeant R. Lee Ermey checking out how it's made then shooting more than twenty AK-47 rounds and over 150 9mm MP5 Navy rounds into the above mentioned Dragon Skin armor. It can take a serious pounding and who doesn't like watching Ermey in his element. OOHRAH!

PS - It doesn't need to be a holiday for you to thank a serviceman. They bleed so you won't have to. Looking in your direction pacifists.
Posted by NolanWoodard at 12:32 PM 1 comment:

Somewhere along the line I starting rendering in my color to a high degree. When it works really well, like on "Farscape: Scorpius", it's great but other times not so much. Coloring cyborg Darth Maul was an opportunity to exercise simple back into habit. This is primarily just gradients and soft cuts on the focus. The only brushwork is in the clouds and dust. Any SFX you see are done as a general application to keep myself from getting too specific. Frankly, I don't think it's lost anything due to the simple rendering. In fact, it may read even better. 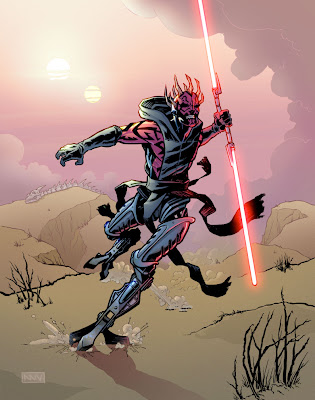 Posted by NolanWoodard at 11:34 PM No comments:

Ever since the Star Wars Visionaries one-shot came out featuring a very much alive but cyborg Darth Maul hunting down Obi-Wan Kenobi on Tatooine I've wanted to draw this version of him. If you've not read it it also contains General Grievous' back story. Very cool comic. Pretty happy with it and feel like there's something new in my inks for some reason. Now can't wait to color it.

So about two years ago my friend Val Mayerik and his buddy Mike Baron were brought in to work on "Outlaw Territory" Vol 2. They needed a colorist and I got the call. It was my first coloring job but it never occurred to me to follow coloring as a career until about nine months ago. Dunno why. It's so freakin' fun. But this volume has been waiting patiently and is finally available in Previews for an October release! I had posted up a preview awhile back when I discovered the Outlaw Territory blog had posted it up. I'm honored Val asked me to color his work and honored again to be published in this volume along with some very talented artists I respect. Check out the credits and get you one! 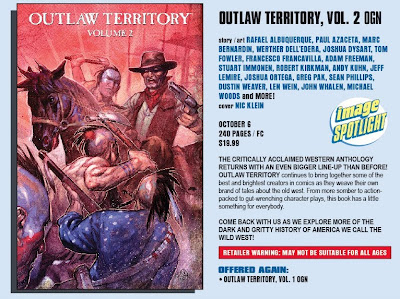 Posted by NolanWoodard at 4:03 PM No comments:

Have I mentioned lately how much I love science fiction? No? Well, not like I needed to with my portfolio and blog design. But I do. Love science fiction that is. And I love coloring "Scorpius"! This issue surprised me how well it looked once completed. Could be the best yet. But I'm coloring #5 right now and it looks even better! So I feel like we're improving with each issue. That's fantastic because this series is already fun and only becoming more so.

"Farscape: Scorpius" #4 comes out this week. Get you one! 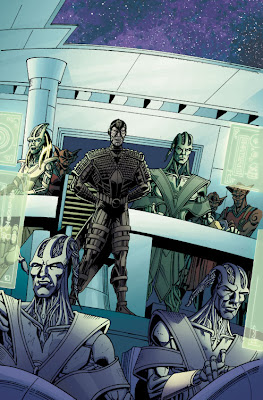 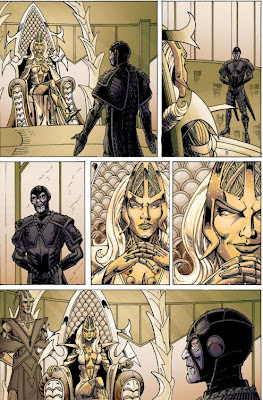 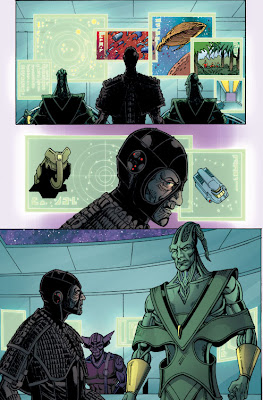 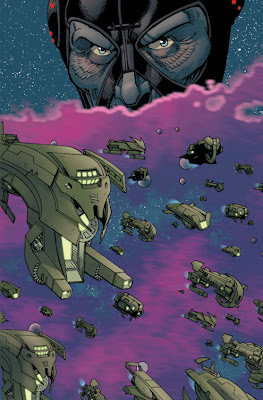 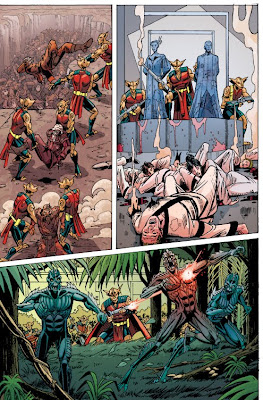 Posted by NolanWoodard at 8:29 AM No comments: