And now my studio is compleeeete.

Been needing this for awhile. It's not the super fancy one I dreamt about but since I'm not doing proofs on a daily basis anymore this little Epson1400 is all I truly need. Bonus, it's not a bank breaker. I just ran two test prints of Nike illustration work I did in the past year and they came out absolutely gorgeous! My home studio is pretty much now complete.

It was a luck buy, really. I had called Fry's Electronics, who are usually awesome, to see if they had one in stock. They had two, including the display. I don't buy displays with printers so I went over with my lovely lady to pick up their last, unopened box. (As I was waiting for them to pull it from the storeroom someone else bought the display.) When they came to me saying the unopened box hadn't been sold because it had been partially crushed I was ticked. We left and roamed around for a bit since we're not often over in that part of town when my lady spotted a Jo Ann Fabrics. We stopped and she did some fabric shopping. (She's a crafty cutie, to be sure!) On a whim I walked over to the Staples next door... to discover they had three Epson1400s in stock with a $50 rebate! I've never seen them stocked in any office supply store before! Crazy lucky! It was a better deal by far than what I would have paid at Fry's so it turned out for the best. I had some serious good shopping karma that night.
Posted by NolanWoodard at 10:34 PM 5 comments:

Email ThisBlogThis!Share to TwitterShare to FacebookShare to Pinterest
labels: studio

The maquette I built is from a rather old design of this character, Adam, for the sake of learning how to make one and having it to show in class. This image below is his final design.

I've been looking at military dress from WWI to modern for inspiration. The older stuff is sturdy looking and, obviously, classic but completely impractical. Since this is a hard sci-fi concept I wanted his outfit to have a more practical and ergonomic design that would come from centuries more of development. However, this character doesn't have access to technologies in the story so it also needed to be completely tech-less. Modern military DBUs helped a lot; specifically Marine and Special Forces designs. Eventually, this'll be used in a pitch. I've another concept illustration for The 8th Day I want to complete to further whet my desire to complete this story. Depending on how the flats for color go I may also re-purpose this for my Heroes Con workshop on "Comic Coloring from a Retouching POV". Let this be the beginning of the end!

Also been picking up on where I left off on researching theoretical propulsion technologies and the actual science behind terraforming. Fascinating stuff!
Posted by NolanWoodard at 9:49 PM 1 comment:

Winter quarter is done! And right on time Shawn took me over to the new Giajin Studio space for their house-warming party. I've never been one for socializing but wanted to get to know the guys a bit more. They were really nice last time I met them and all but one are PC-lovers. How can I not have a soft spot for that? Shawn wanted to nail down a time for intern interviews too. Gaijin wants interns. Our students want internships. We're super close. It's the perfect situation.

The first time I met the studio I talked Stelfreeze's ears off since we had both had similar experiences with advertising and illustration jobs. This time I wanted to pop around and just briefly meet everyone without being a pain. Cully's drawing board is an old, wooden model just like my own. Very cool! Never seen another like it before last night. But I was drawn to one office: Karl Story's. It's decked out very similarly to my own home studio and so immediately felt at home. He was finishing up a page and allowed me to watch his Photoshop technique in channels. His wife was super nice too and their kid a cute Star Wars fan. I've said it before and I'll say it again, it's one thing to meet an amazing artist. It's another to meet an amazing artist that is also a really nice person. I left very tired but happy to meet some great people last night.

My plans were to go home and crash watching tv; a luxury. That didn't quite work out. I was still wide awake when my lady called to ask if I were ok. I hadn't realized a tornado had hit downtown Atlanta! I had been mesmerized by the History Channel's new show "Battlefield 360". So I turned to CNN and local stations and watched the reports until 3am. It had been raining really hard and lightning etched the skies like a lava lamp at high speed but I hadn't been concerned about a tornado. There were no news warnings, no emergency broadcast, no sirens, no nothing. Apparently it was a "rogue cell". So any family or long distance friends reading this, I'm fine. It'll be awhile before downtown Atlanta is ok though. Glad I got all my paperwork completed before this happened or I'd be forced to go downtown to finish it up today.

Today begins my Spring "Break". I'll be working on a couple personal projects and prepping for Spring courses. It'll be the first quarter I don't have to teach a foundations class! Wonderful!
Posted by NolanWoodard at 12:36 PM 1 comment:

Email ThisBlogThis!Share to TwitterShare to FacebookShare to Pinterest
labels: personal

Sketch Challenges at the Temple

I help Shawn Crystal run the Temple of Cartoon Mojo for the SCAD-ATL SEQA Department and every week we have a sketch challenge. When I've time I try to do it myself and since this week's topic is Abe Sapien I couldn't refuse. This is Abe reminiscing about his human life long gone and about to be rudely interrupted. 60-minute sketch. Need to practice that more. 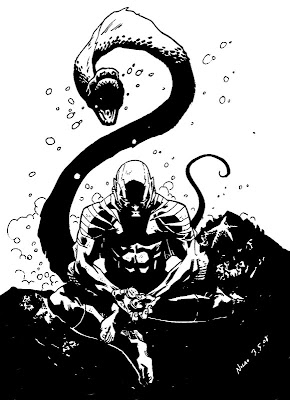 Email ThisBlogThis!Share to TwitterShare to FacebookShare to Pinterest
labels: sketch

After six years of use my frames finally died over the weekend. Superglue, epoxy, boat anchor glue, plumber's putty, etc. hasn't worked kept them together more than a few hours at a time. (I know it's cliched and dorky but I have to be able to see!) They've snapped twice just tonight so I've broken out the old frames from seven years and one prescription ago. It's the perfect recipe for a chronic headache. 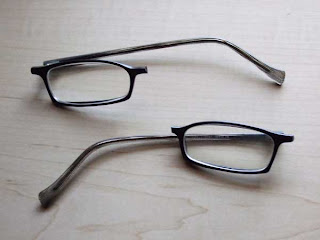 The new pair I ordered Saturday won't be ready until mid-next week at the earliest. I have to get heavy duty 1.74 material so they aren't as thick as coke bottles, which is no exaggeration, but it takes forever to manufacture them. I'm hoping I like my new frames but have mixed feelings about them. This all sounds very lame but after twenty-five years of wearing glasses they are an important part of my self-identity and matter a great, great deal to me.
Posted by NolanWoodard at 7:39 PM 3 comments: